I once spent a very uncomfortable period of time stuck in one of those carnival rides that, for brief periods of time, spins riders in a circle as the cab you are in also twirls. As uncomfortable as the ride was, the “stuck” part came while my cab was high in the air—and turned upside down. In no time at all, it was obvious that this extended “upside down” state wasn’t contemplated by those who designed the seating compartment (nor, apparently, had they considered that my compartment “mate” would find it exciting to rock our stuck cab during our brief “internment”).

One of the comments you hear from time to time is that the tax incentives for 401(k)s are “upside down,” that they go primarily to those at higher income levels, those who perhaps don’t need the encouragement to save. And from a pure financial economics perspective, those who pay taxes at higher rates might reasonably be seen as receiving a greater benefit from the deferral of those taxes.
Indeed, if those “upside-down incentives” were the only forces at work, one might reasonably expect to find that the higher the individual’s salary, the higher the overall account balance would be, as a multiple of salary. However, drawing on the actual administrative data from the massive EBRI/ICI 401(k) database, and specifically focusing on workers in their 60s (broken down by tenure and salary), those ratios hold relatively steady. In fact, those ratios are relatively flat for salaries between $30,000 and $100,000, before dropping substantially for those with salaries in excess of $100,000.

In other words, while higher-income individuals have higher account balances, those balances are in rough proportion to their incomes—and not “upside down.” 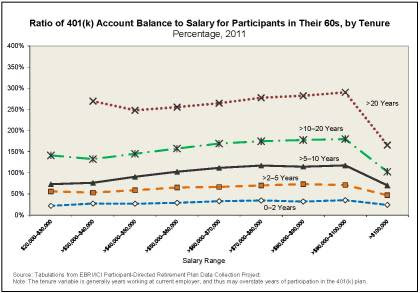 As those who work with these programs know, what keeps these potential disparities in check is the series of limits and nondiscrimination test requirements: the boundaries established by Internal Revenue Code Secs. 402(g) and 415(c), combined with ADP and ACP nondiscrimination tests. Those plan constraints were, of course, specifically designed (and refined) over time to do just that—to maintain a certain parity between highly compensated and non-highly compensated workers in the benefits available from these programs. The data suggest they are having exactly that impact.

And that’s why focusing only on the incentives—and not also on the limits—can leave you “stuck” with only part of the answer.