Early on a bright Tuesday morning in 2001, I was in the middle of a cross-country flight, literally running from one terminal to another in Dallas, when my cellphone rang.

It was my wife. I had been on an American Airlines flight heading for L.A., after all—and at that time, not much else was known about the first plane that struck the World Trade Center on Sept. 11. I thought she had to be misunderstanding what she had seen on TV. Would that she had…

That day, when family and friends were so dear and precious to us all, I spent in a hotel room in Dallas. It was perhaps the longest day—and loneliest night—of my life. In fact, I was to spend the next several days at that Dallas hotel. There were no planes flying, no rental cars to be had—and so I was stranded—separated from home and family by hundreds of insurmountable miles for three interminably long days. As that week drew to a close, I was finally able to get a rental car and begin a long two-day journey home. While it was a long, lonely drive, it gave me a lot of time to think, though most of that drive was a blur, just mile after endless mile of open road. 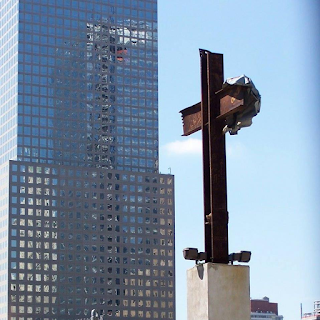 There was, however, one incident I will never forget. I was driving in a remote section of Arkansas when on that long, lonesome highway I spotted something approaching in my rearview mirror. Turns out, it was a group of Hell’s Angels bikers, what had to be a couple of dozen riders—led by a particularly “scruffy” looking guy with a long beard and lots of menacing tattoos on a big bike. We couldn’t have been more different. But as he passed, I saw unfurled behind him on that big bike—an enormous American flag.

At that moment, for the first time in 72 hours, I felt a sense of peace—the comfort you feel inside when you know you are going home.

Without question this year has been one of extraordinary pain and suffering; one full of tensions, grief and anger that seems at times destined to pull our nation apart at the seams.

But nearly two decades later, I still feel that ache of being kept apart from those I love as if it were yesterday—but also still remember the calm I felt when I saw that biker gang drive by me flying our nation’s flag.

On not a few mornings since that awful September day, I’ve thought about how many went to work, how many boarded a plane, not realizing that they would not get to come home again. How many on that day sacrificed their lives so that others could go home. How many still put their lives on the line every day, here and abroad, to help keep us and our loved ones safe.

We take a lot for granted in this life, nothing more cavalierly than that there will be a tomorrow to set the record straight, to right wrongs inflicted, to tell our loved ones just how precious they are.

This Friday, as we remember that most awful of days, and the loss of those no longer with us, let’s all take a moment—together—to treasure what we have—and those we have to share it with still.