There’s an old saying that when you assume… well, here are five assumptions that can create real headaches for retirement plan fiduciaries. 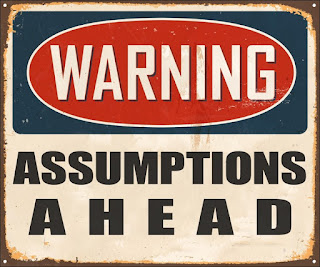 While plan advisers and consultants routinely counsel on the need for, and importance of, an investment policy statement (IPS), the reality is that the law does not require one, and thus, many plan sponsors — sometimes at the direction of legal counsel — choose not to put one in place.

Of course, if the law does not specifically require a written IPS — think of it as investment guidelines for the plan — ERISA nonetheless basically anticipates that plan fiduciaries will conduct themselves as though they had one in place. And, generally speaking, plan sponsors (and the advisors they work with) will find it easier to conduct the plan’s investment business in accordance with a set of established, prudent standards if those standards are in writing, and not crafted at a point in time when you are desperately trying to make sense of the markets. In sum, you want an IPS in place before you need an IPS in place.

It is worth noting that, though it is not legally required, Labor Department auditors routinely ask for a copy of the plan’s IPS as one of their first requests. And therein lies the rationale behind the counsel of some in the legal profession to forego having a formal IPS: because if there is one thing worse than not having an IPS, it is having an IPS — in writing — that is not being followed.

Assuming that all target-date funds are the same.

Just about every industry survey you pick up verifies that target-date funds, as well as their older counterparts, the lifecycle (risk-based) and balanced funds, have become fixtures on the defined contribution investment menu. For a large and growing number of individuals, these “all-in-one” target-date funds, monitored by plan fiduciaries and those that guide them, are destined to be an important aspect of building their retirement future.

There are obviously differences in fees, and that can be affected by how the funds themselves are structured, drawn from a series of proprietary offerings, or built out of a best-in-class structure of non-affiliated providers.

However, and while the bulk of TDF assets are still spread among a handful of providers, there are different views on what is an “appropriate” asset allocation at a particular point in time, discrete perspectives as to what asset classes belong in the mix, notions that individuals aren’t well-served by a mix that disregards individual risk tolerances, arguments over the definition of a TDF “glide path” as the investments automatically rebalance over time, and even disagreement as to whether the fund’s target-date is an end point or simply a milepost along the investment cycle. Oh, and a new generation of custom TDFs are now in the mix as well.

(See also, “Five Things the DOL Wants You to Know About TDFs.”)

ERISA has a couple of very specific exceptions through which you can limit — but not eliminate —fiduciary obligations. The first has to do with the specific decisions made by a qualified investment manager — and, even then, a plan sponsor/fiduciary remains responsible for the prudent selection and monitoring of that investment manager’s activities on behalf of the plan.

The second exception has to do with specific investment decisions made by properly informed and empowered individual participants in accordance with ERISA Section 404(c). Here also, even if the plan meets the 404(c) criteria (and it is by no means certain it will), the plan fiduciary remains responsible for the prudent selection and monitoring of the options on the investment menu (and, as the Tibble case reminds us, that obligation is ongoing).

Outside of these two exceptions, the plan sponsor/fiduciary is essentially responsible for the quality of the investments of the plan — including those that participants make. Oh, and hiring a 3(16) fiduciary? Still on the hook as a fiduciary for selecting that provider.

Assuming that all expenses associated with a plan can be charged to the plan.

Assuming that the plan allows it, the Department of Labor has divided plan expenses into two types: so-called “settlor expenses,” which must be borne by the employer; and administrative expenses, which — if they are reasonable — may (but aren’t required to) be paid from plan assets. In general, settlor expenses include the cost of any services provided to establish, terminate or design the plan. These are the types of services that generally are seen as benefiting the employer, rather than the plan beneficiaries.

Administrative expenses include fees and costs associated with things like amending the plan to keep it in compliance with tax laws, conducting nondiscrimination testing, performing participant recordkeeping services, and providing plan information to participants.

Assuming that the worst-case deadline for depositing participant contributions is the deadline.

The legal requirements for depositing contributions to the plan are perhaps the most widely misunderstood elements of plan administration. A delay in contribution deposits is also one of the most common signs that an employer is in financial trouble — and that the Labor Department is likely to investigate.

Assuming you have to figure it all out on your own.

ERISA imposes a duty of prudence on plan fiduciaries that is often referred to as one of the highest duties known to law — and for good reason. Those fiduciaries must act “with the care, skill, prudence and diligence under the circumstances then prevailing that a prudent man acting in a like capacity and familiar with such matters would use in the conduct of an enterprise of a like character and with like aims.”

The “familiar with such matters” is the sticking point for those who might otherwise be inclined to simply adopt a “do unto others as you would have others do unto you” approach. Similarly, those who might be naturally predisposed toward a kind of Hippocratic, “first, do no harm” stance are afforded no such discretion under ERISA’s strictures.

However, the Department of Labor has stated that “[l]acking that expertise, a fiduciary will want to hire someone with that professional knowledge to carry out the investment and other functions.” Simply stated, if you lack the skill, prudence and diligence of an expert in such matters, you are not only entitled to get help — you are expected to do so.